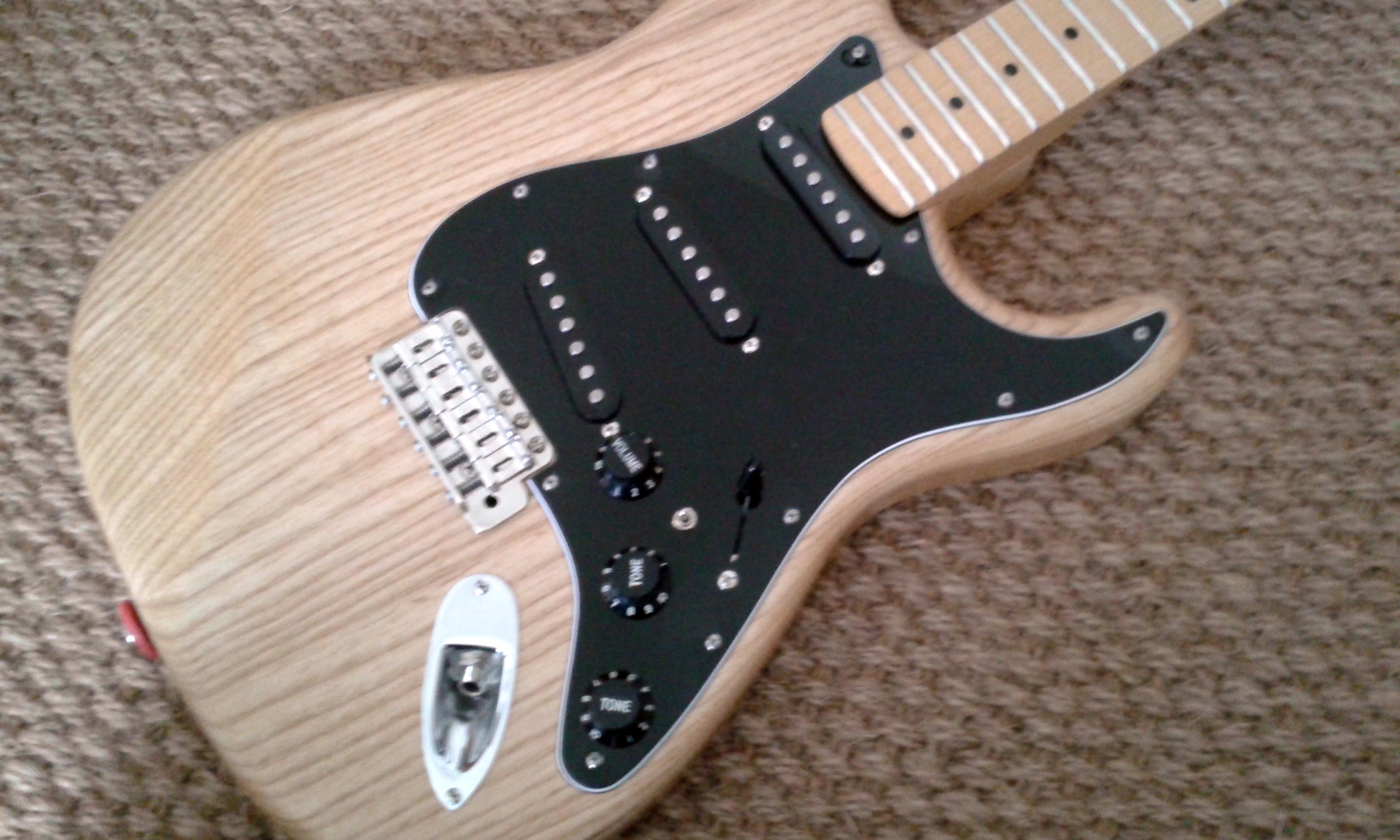 This is where it’s all starting to come together fast. I originally started the build to learn the basics of how to put a guitar together, and a lot of the skills I’ve brought to play were gathered doing other creative stuff. I never really got a handle on electrics though, and it still seems a little daunting. I’m also really keen to get this first guitar finished. I’m starting to wonder if I soldier on and learn how to put a good sounding circuit together now – or plump for something a bit more basic this time, and get to grips with the electrical stuff on another build.

When I think Stratocaster, I always hear the sound of Pink Floyd’s Dave Gilmour. Some people probably think Hank Marvin or even Hendrix, but for me – that slightly overdriven Gilmour tone keeps something of a bluesy feel, but with such an expressive voice. Beneath it all there’s something distinctly Fender-y going on, but I also discover that a lot of the tone Gilmour gets is from a special wiring of the usual Stratocaster circuit. At this point, it all starts to get a little bit too technical for me – but I really want to play around with, and learn to explore that sound. I discover that the “Gilmour Plate” is a pretty standard mod for a Stratocaster, and I also discover a guy who offers to pre-wire the plate into the pickguard of my choice using a set of his own, hand-wound pickups – designed specifically to go a good way towards capturing the distinctive sound I’m looking for.

So I email Tony Partridge at Ironstone pickups, and introduce myself. After setting out what I’m trying to do and, taking into account the amp I use, together with what approximates as my usual playing style, Tony recommends a set of his Platinum pickups to be fitted to the Fender scratchplate I’ve already test fitted to the guitar. I also select black pickup covers and knobs to be supplied as part of the fit-out. I really like the idea of ash with all black hardware. It takes Tony just a weekend to put the plate together, and it arrives nicely boxed with clear instructions of how to wire it in.

It’s a simple three wire connection, which makes my original plans for a star earth appear hopelessly over-engineered. All the grounding is taken care of on the plate itself. The plate I have supplied is an original Fender component, and is supplied with a grounding sheet of aluminium foil on the reverse. All I need to do is to ensure that there’s a good connection between that and the continuous copper foil ground that I’ve fitted into the body. Maybe that over exuberance with the copper foil on the body wasn’t such a bad idea after all. The three connections that have to be made are colour coded. One to the jack “hot” or live signal, one to the jack “ground” and the third to my central grounding point I installed in the tremolo spring cavity.

I run this third grounding wire through the specially drilled hole, into the tremolo cavity, and then solder it to a lug which, in turn, is then attached to the grounding point. With a check for continuity between all surfaces of the “Farraday cage” – throughout all the pickup and wiring cavities, confirmed with a multi-meter – all I now have to do is thread the two signal wires through into the jack plug cavity, and then solder them to the correct poles of the jack socket. I’ve purchased a high quality, Switchcraft jack to fit into place on the jack plate. Tony advises to double check the correct wire is attached to the right pole – hot to hot, ground to ground – then it’s a simple check to plug into an amp and touch a pole of each pickup, in turn, with a screwdriver. An encouraging thump confirms that the connections are good. What is more – the distinct lack of hum confirms that my shielding efforts have worked as well as I could have expected.

The Gilmour plate modification takes the standard three-pickup, five-way blade switch, and adds another small, three way switch at the side. The usual five-way switch selects either the neck, centre or bridge pickups in positions 1, 3 and 5. Positions 2 and 4 combine the middle pickup with either the neck or the bridge pickups. These “in between” positions provide some of the classic Stratocaster tones and a distinct sound which I’ve always thought of as a bit of a, bell-like “quack”. The volume knob does what it says, and affects the entire combined output of the selected pickup configuration. The two tone knobs control the tonal character of the neck and middle pickups respectively. The bridge, or “lead”, pickup just does what it does. The wiring circuit contains best quality, “Sprague, Orange Drop” capacitors to take care of the tone shaping, and there’s a treble bleed mod to stop the tonal balance wandering too much as the volume is reduced – a common problem with some of the standard circuits.

The “Gilmour modification” allows you to switch the neck and bridge pickups on, in parallel with each other, to get that particular sound. The addition of the small switch allows you to either stick with just the standard 5-way switching, or to swich to a “bridge in series” setting.

That’s more than enough tonal range in a first-build Stratocaster, for anyone. The scratchplate is screwed down, and I’m almost good to go. I mark off the positions for the strap buttons, drill holes for the screws and attach them where I want them. I’ve tried straplocks over the years – but never really warmed to them. That’s not to say I don’t value some sort of insurance. I’ve had the strap come off a guitar a few times – once even on stage – but I’ve fortunately been able to catch the guitar neck, avert a disaster and keep playing. I was an early convert to the good old-fashioned Grolsch rubber solution – as used by Joe Strummer and countless others. If it was good enough for Strummer, it’ll do for me. Like all my guitars – the Strat gets a pair of authentic Grolsch rubbers as part of the christening process. Cheers!

Almost there. A string tree, some strings, basic setup adjustments and I should be able to see how my efforts have paid off…