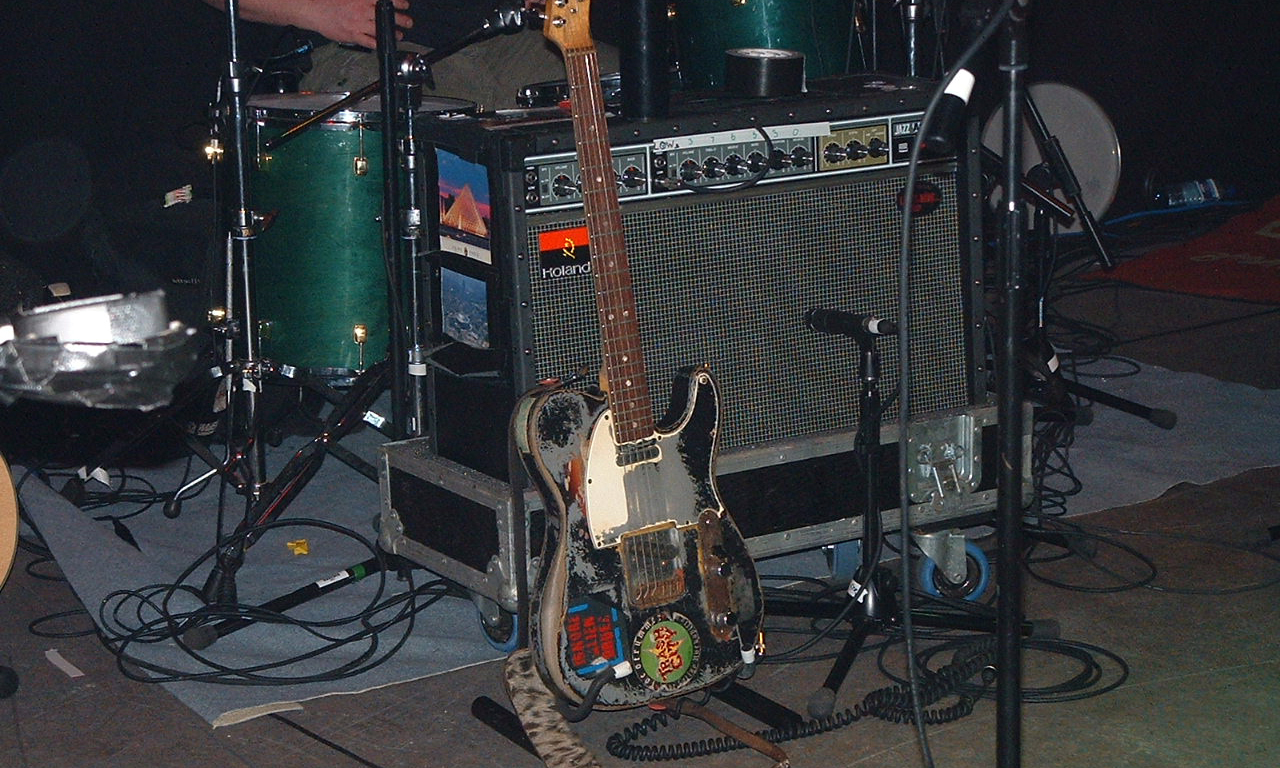 With the Ash Strat “finished”, and with the Jaguar body still curing until October – there’s a bit of a lull in the workshop. To be honest – it’s too hot to do much, since I insulated the walls when I kitted it out. Whilst it helped deal with the worst of the winter months, it also tends to create near sauna conditions in the summer. This year, it’s way too hot for gardening too, so apart from getting to test out my newly-finished Ash Strat – I find myself scratching around for a new project.

I’ve got a good friend coming up to a bit of a notable birthday, and he’s been a big fan of Joe Strummer all his life. I studied gilding a few years back, and picked up a few techniques along the way for ageing and relicing picture frames. It’ll be fun to see if I can transfer some of those skills to guitar bodies, and turn out a suitably fucked up replica of Strummer’s famous Telecaster. My mate’s a bit of a player in his spare time – so if I can make it playable – then it won’t just have to hang on the wall. So it’ll need to sound the part too.

Looking around the internet – it seems there’s a bit of a thing for Strummer replicas. When you think about it – it probably is one of the most iconic looking guitars, and building replicas of it certainly seems to be a bit of a rite of passage for most self-builders. There’s a fair bit of initial research involved. As I look for information and live pictures of Joe from his days in the Clash, it’s evident that the guitar has had quite a few different “looks” along the way. The version that seems the most iconic, and the one which Fender draws on for it’s authorised signature replica, seems to be the final, Mescoleros, state of evolution – as evident from photos of the original, which was last on display at the Rock and Roll Hall of Fame Museum in Cleveland.

The Strummercaster has a whole history of evolution, and I’m beholding to online documentary information by another self-builder who did his own version of a replica a while back. Also to a fantastic set of live images of Joe, collected at Clashphotorockers. It emerges that the guitar, a 1966 standard Fender Telecaster in a three tone sunburst finish, was used in its’ original form by Joe from his days in the 101’ers – right up until the point when just about all of the Clashs’ equipment had an appointment with a car spraying workshop, somewhere in West London. At that point, the guitar and scratchplate got sprayed matt black. Over the years, the look of the guitar was modified, with the addition of the iconic “Ignore Alien Orders” sticker and various other bits of sprayed on graffiti during the Clash years – and on to the years with the Mescaleros, where some details were lost, covered over – and where the iconic “Trash City” sticker appeared.

There was also a good deal of “wear and tear” along the way. Joe certainly threw this guitar around a lot – and there’s exaggerated evidence, especially on the rear, of what guitar players call, “buckle rash”. Most of us have accidentally marked the backs of our guitars by playing them whilst wearing a belt buckle, or a pair of jeans with a metal button. Some of us are mortified, and those who have an interest in the monetary value of their equipment will be dismayed to see how the value usually drops – despite the lack of effect on playability. Joe, himself, seems to have generally favoured the studded belt approach to guitar care. The back is what an antique dealer might refer to as, “well patinated”. It’s going to be a real pleasure taking a bit of a tour through the evolution of the original guitar, as I try to approximate some of the processes involved in re-creating the authentic look. A 50-odd year old guitar which has been played, almost to destruction. To top it all – I want to make sure it’s capable of sounding something like the real thing – with an attempt to capture some of the  authentic growl and twang of a proper ’60’s Vintage Tele.

So, it’s a plan – of sorts. I’ve got a good amount of time before the guitar needs to be ready – but the weather’s so good at the moment, it makes sense to push on with any spraying and finishing work while the warm weather holds, and before it starts to get damper and colder. I can still be polishing the Jaguar body and sorting pickups and wiring out, in the cold of January. I might have to neglect work on the Jaguar occasionally – but the Strummercaster promises to have some lessons in store, which may well come in handy. For now, at least, it’s down to the desk-bound activity of sourcing and pricing parts and options. With a bit of Clash on the old stereo, naturally.