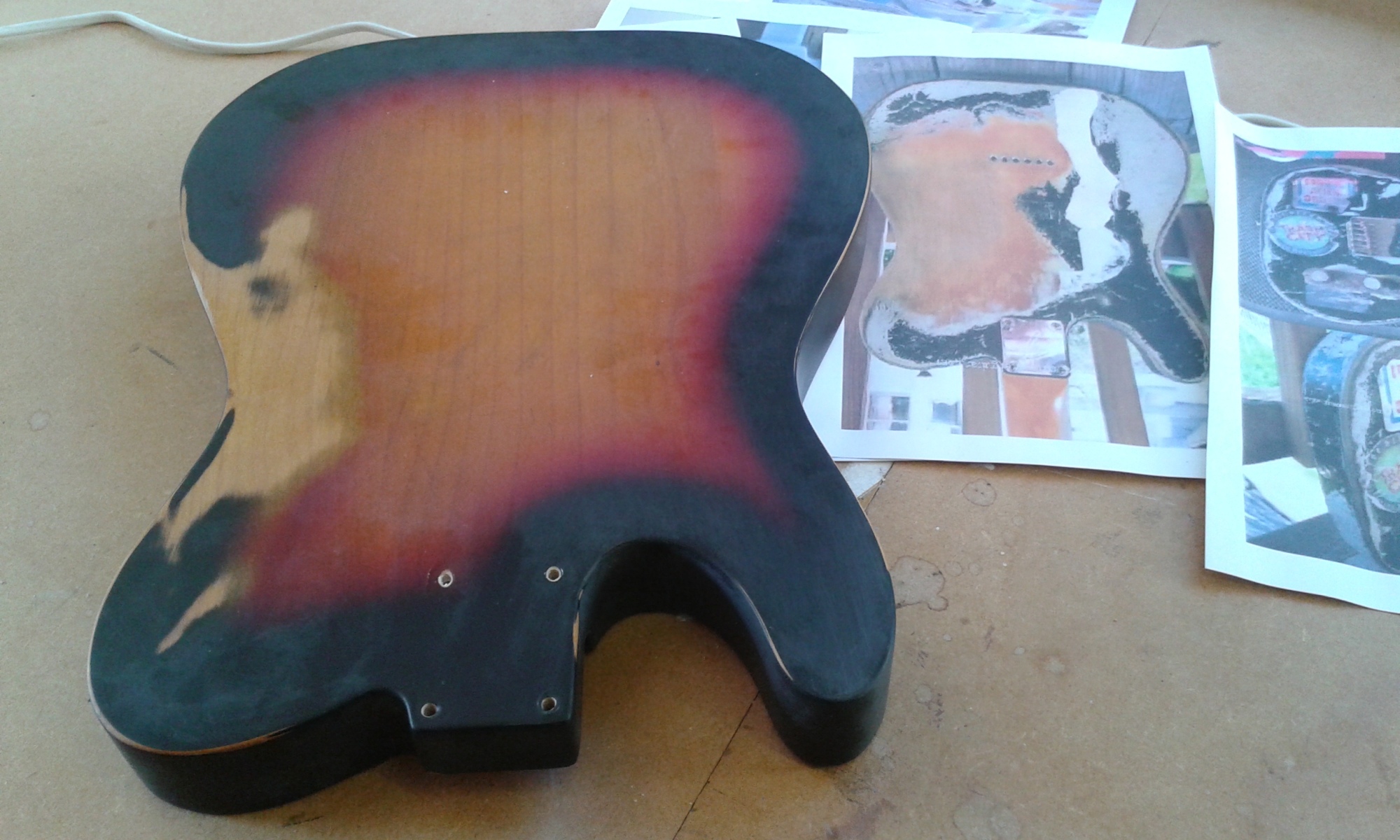 I’ve had a big framing job on – so it’s been important to keep the workshop clear of too much wood dust, overspray and the inevitable bits of crud which float around. My cobbled together spray booth helps keep things clean – but it hasn’t been the best time to start sanding down polyurethane, paint and wood. Until now.

The best detailed photos I can find of the, “original”, have been dutifully uploaded by the builder of a previous “Strummercaster” at strummerguitar.com. So, with copies of those in hand, together with a few other – mostly black and white – source images of Joe and the guitar in action – I look to kick off the project. So, it looks like I’ll be mostly basing the look of the thing on someone else’s replica. A replica of a replica, (but with, at least, some cross-reference to the original). I print out a few copies of some of the details, and hang them around the workshop, where I can refer to them while I work. I’ll be learning how to get the original finishes off, and then how to build up new ones over the top. At some point – there will inevitably be a bit of simulated ageing – or gratuitous abuse – call it what you like.

The purist would probably like to recreate every single addition to the overall design over time – even to the point of adding detail that will be subsequently removed. It’s what we would have formally called an, accretive process, way back in Art School. However, 50 years of rock and roll wear and tear is a tough order to approximate, condense and reproduce – so I’ll be taking a bit of a pragmatic approach, and focusing on whatever works to get a decent job done, without spending months and years on it. First step is getting over the initial desecration of stripping the pristine finish off the body – but I need to see how this polyurethane finish actually comes off, and what’s underneath. A deep breath, a few passes with a rough, maroon, Scothchbrite pad, and the shine is well and truly gone.

It takes a good while, however to get through the full depth of the polyester coat. (By the way – if you’re trying this at home kids – don’t forget your dust mask!) I concentrate on the areas which are subject to the most wear, and keep going to find out how much rubbing it’ll take to get all the way through the varnish, to the sunburst coats below, and the bare wood beneath. Time passes. The worst wear is on the back – so I concentrate, at first, on the area at the top of the rear side. Once I’m through the varnish, and I begin to eat into the colour stained areas – trying to sand the finish away to match the detail pictures. I switch to wet & dry, 360 grit – so that the coating removal is a little bit more under control. I need to see how I can develop a softer, graduated, transition here and there. I also get a feel for how thick the various colour coats are. The, fairly opaque, black – at the edges – is the first to cut through, (and the last, therefore applied). Then, underneath, a thin pinky/purple translucent stain, followed by the amber stain. Under it all, the alder looks nice and clean and new. I might have to see about that later.

At the front – the main area to concentrate on, at first, seems to be where the bridge and pickups are. The pickguard obviously covers over much of this area, and it looks – from documentary film of the guitar originally being sprayed black at the car shop – that the pickguard was left on the guitar at the time of spraying. Photos also seem to show the area around the bridge to be light and unpainted, with visible feather edges to a grey primer coat, and the black colour coat set back a little from that. I think it’s likely that the bridge was in position, and masked off for the spraying – so I’ll be spraying the guitar black with that in mind. I work on down through all the coats, to the bare wood in-between the pickup routs, using a coarse, red Scotchbrite pad over a wooden block – to keep the surface reasonably level, for now.

With all replica jobs – and that goes for picture frames as much as with anything else, including guitars – you always need to consider what causes each of the signs of age-related wear and tear you’re trying to simulate. Obviously – there’s a fair bit of chucking around evident, and I’ll take great pleasure in approximating some of the bigger dings in a similar manner. However, a lot of wear – certainly around the pickguard – is from thousands, (millions?), of plectrum scratches to the surface. Anyone who knows Willie Nelson’s “Trigger” can see how repeated strum action can eventually wear down the finish – even through the wood of the soundboard itself. In the detail photos I’m using as reference, it looks like there’s an area – just above the pickguard – which has worn into the surface of the guitar in just this manner. Now – not even repeated scratches with coarse grit are going to build this up anywhere near as quickly or convincingly enough. I dig out a portable, powered hand drill, together with a flap-wheel attachment, which will have to become the approximation of Joe’s fist, and plectrum. He was a right hander, like me, so I spend a good while concentrating on the area just above the pickguard – sanding in the direction of what, I consider, may well have been the direction of his hand movements as he belted out the power chords. I’m working in my workshop. More of a shed than a garage – but as I’m working away, and looking back at those reference pictures from way back in the day – memories come flooding back, and I can’t help but sing the words in my head…

“Back in the garage with my bullshit detector…”