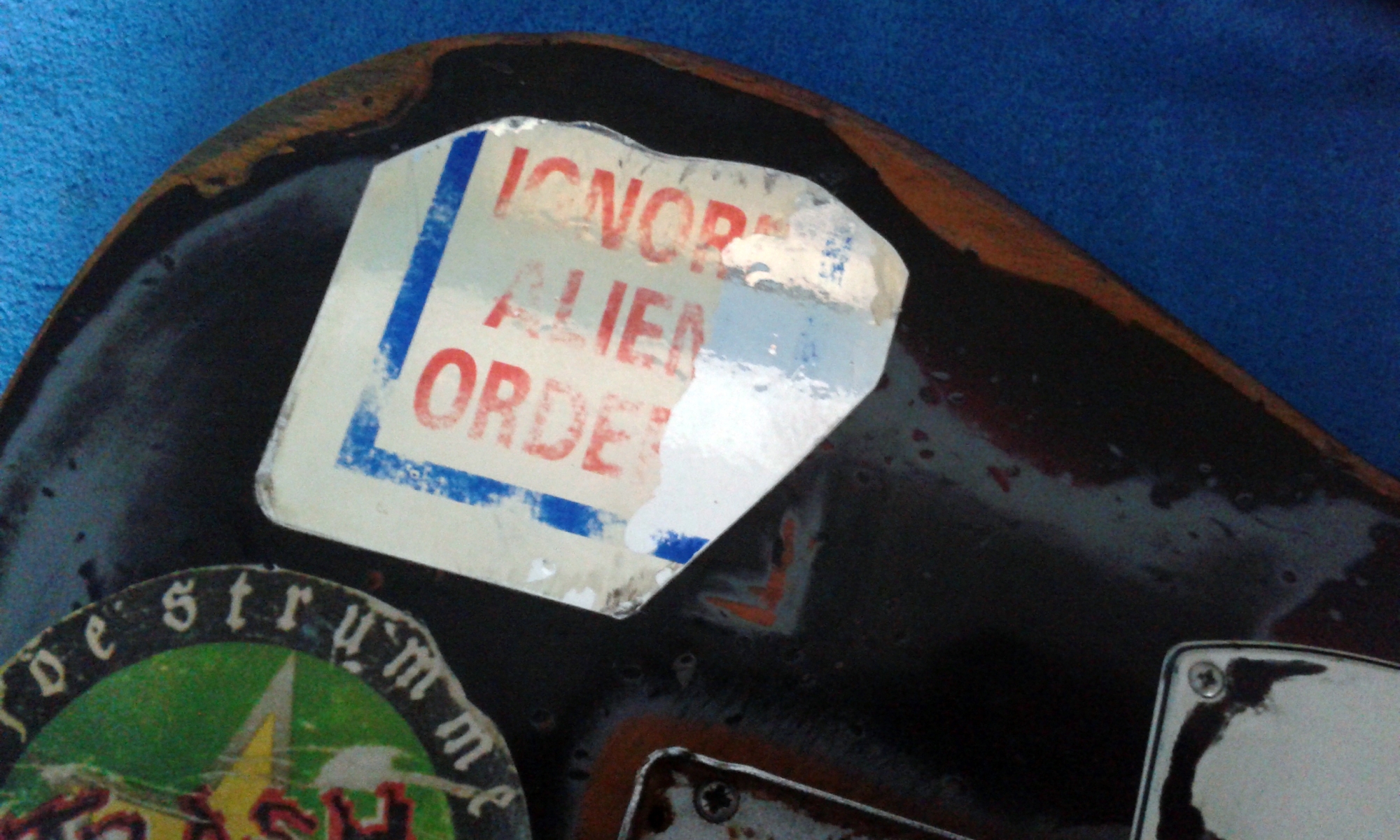 As with the “Trash City” sticker, I actually sourced two versions of the “Ignore Alien Orders”, (IAO), sticker – from two different suppliers. One in the US, and the other here in the UK. The UK supplier provided replicas which had already been altered to look aged – the outlines reshaped to look like the stickers had been worn away, and the imagery printed to look old. In contrast, the US supplied stickers were, “as new”. Whilst they probably were a little more authentic – they were going to need some substantial artificial ageing.

For the “Trash City” sticker – I went with the, pre-aged, UK version. Although the creases and wear were obviously printed – there was something about the slightly yellowed stock paper, combined with the die-cut reshaping which suited the look of the build better. However, the UK supplied IAO sticker wasn’t printed on a metallic foil, like the original, and so – although it was cut to the correct shape – I thought it might be better to try and call on the shininess of the metallic sticker, as a bit of visual “texture”.

This left me with a bit of a job to do in ageing and relicing the metallic, US supplied sticker. As is the case with all relicing jobs – I’ve only really got one shot at this – (unless I want to shell out again, and wait around for US airmail). But if I go slowly, and do a few checks along the way, I should be able to work up a decent representation by following my same, basic three step ageing approach. Damage, wear, dirt.

First is to reshape the metallic sticker to match the  UK version, which appears as if it may have been taken from a photo, or scan of the original. Maybe even from a decent reproduction of the original. Whilst the design and printing doesn’t match exactly, it’s useful to use the UK version as a template overlay, and then to cut the metallic sticker to shape, using a razor blade. This gives me a couple of valuable offcuts – which I can practice my ageing techniques on.

In order to provide the necessary levels of wear – I can’t think of a much better way of ageing the sticker than abrading it with Scotchbrite pads, or Micro-mesh. That works out reasonably well – using a bit of naptha here and there to vary the level of abrasion, and taking time to make sure the main areas of wear roughly match the original. The marks are directed roughly vertically – a little from top left towards the bottom right. This is so the marks look like they are the result of repeated strumming or arm movement. Where a fine, grey, Scotchbrite pad is used – the marks can be polished back a little by using micro mesh – but it’s apparent that the ink used isn’t that thick, and too much overworking very quickly removes all traces of the legend. I can’t afford to get carried away, or I’ll have nothing left.

One plus from the ageing process, is that it helps to knock the overall shininess of the sticker back. The original is very shiny – so much so, that it’s hard to actually read the legend. Rubbing the silver down a little helps to dull the surface, and cuts down on the interference caused by the reflection. The sticker’s now looking much more the part.

Now, in building this guitar, I’m not trying to make an exact replica of the original. I’m not in any way setting out to counterfit Fender’s own production replicas either. (Actually, in my humble opinion they were pretty awful. That link with Shepard Fairey imagery was a bit incongruous, and the overall look of a sharp, newly painted, “antique” just looked so fake – but I digress). As I’ve detailed before, on previous posts, this is a gift for a good mate and a lifelong Strummer devotee. I want it to have the look of the original as a nod to our mutual appreciation of the man, and his work. I don’t care if every scar doesn’t match exactly – I just want a playable guitar which has a close visual resemblance and, (if possible), something of a shared affinity with the original.

Since playability is a must – there’s always the possibility that subsequent use of the guitar may result in further ageing of the component parts. And there’s my conundrum. When I’ve finished the project – do I lacquer it and try to protect the fake ageing effect – freezing it in time? Or do I accept ongoing ageing as inevitable, and a part of the object’s story? The printing on the IAO sticker may quickly rub away. Since it’s such an iconic part – do I try to protect it or not? It’s a question I’m still pondering as regards the whole guitar. For the sticker – I decide that a couple of coats of my vintage amber tint nitro might help to seal the printing behind a layer of fake age. A quick test on one of the offcuts shows that there’s no apparent reaction between the lacquer and the plastic metallic film – so I shoot a few coats of lacquer and let it dry overnight.

The gloss lacquer restores some of the shine, but it has also slightly tinted the foil. I can restore the dullness with a Scotchbrite pad again – this time varying the amount of rubbing back, imparting slight tonal variations across the image. Then, after cleaning the body of the guitar with naptha, and having checked the location of the sticker in relation to all the other components on the body – I apply the sticker. As usual, I work from the centre out. Pressing down, and pushing any air bubbles out towards the edges. Once the sticker is firmly attached, I rub over with an agate burnisher – using the backing paper as a shield to avoid too much rubbing at first. (The lacquer is still a little soft here and there, and this adds another layer of wear).

With the sticker firmly in place, it’s now just a matter of bedding it in, so that it looks consistent with it’s surrounding. In places, I rub the sticker at the edges, direct with the burnisher, to try and reduce the sharp, new-looking edge. This erodes little areas of lacquer at the edges – and here the shiny silver shows through again, while the soft rubbed-off lacquer sticks together a provide a few rough slubs around the edge.

I use a Scotchbrite pad, and a bit of wet and dry over a backing block to work a bit more on the edges – especially at the top, where the original has been worn away over time. I also work a small area on the body at the bottom right of the sticker, where part of the original sticker has been removed, and has taken a bit of paint with it. It’s while I’m trying to mask a bit of the body off that I discover that the tape I’m using is way too grabby to avoid pulling off some of the tinted lacquer and, with it, an area of the print below. This completely removes some of the print from the foil.

But, if anything, it’s just another case of serendipity. A happy accident, and something that any creative undertaking needs to fully embrace. Whilst it was unintentional “damage,” and the result may well differ from the original – it’s still identifiable as the iconic “Ignore Alien Orders”, and the additional wear serves to add an aspect of contrast between the amber tinted, printed area, and a polished, shinier, more silvery area, where a player’s arm may well have rubbed away the print over time. It still looks in context with the rest of the piece. One thing I stand by when relicing stuff, is to build effects up bit by bit, layer on layer. Things which are contrived to look accidental, sometimes actually don’t. The way to make things look convincing is to let your processes have as much of an element of chance as possible, and to layer those processes and their effects, one on top of another.

Now that I’m done, I do wonder though, if the lacquer might actually be prone to rubbing or flaking off over time. Maybe it wasn’t the protective layer I thought it was. And now I’m back to wondering if I need to protect the overall finish again…

The final layer of ageing is to add a little light surface damage here and there. Some indents, and a few bits of spot abrasion. My stock gilding approach should do the trick. A decent sized bunch of keys dropped a few times from six foot, or so, onto the face of the sticker is enough.