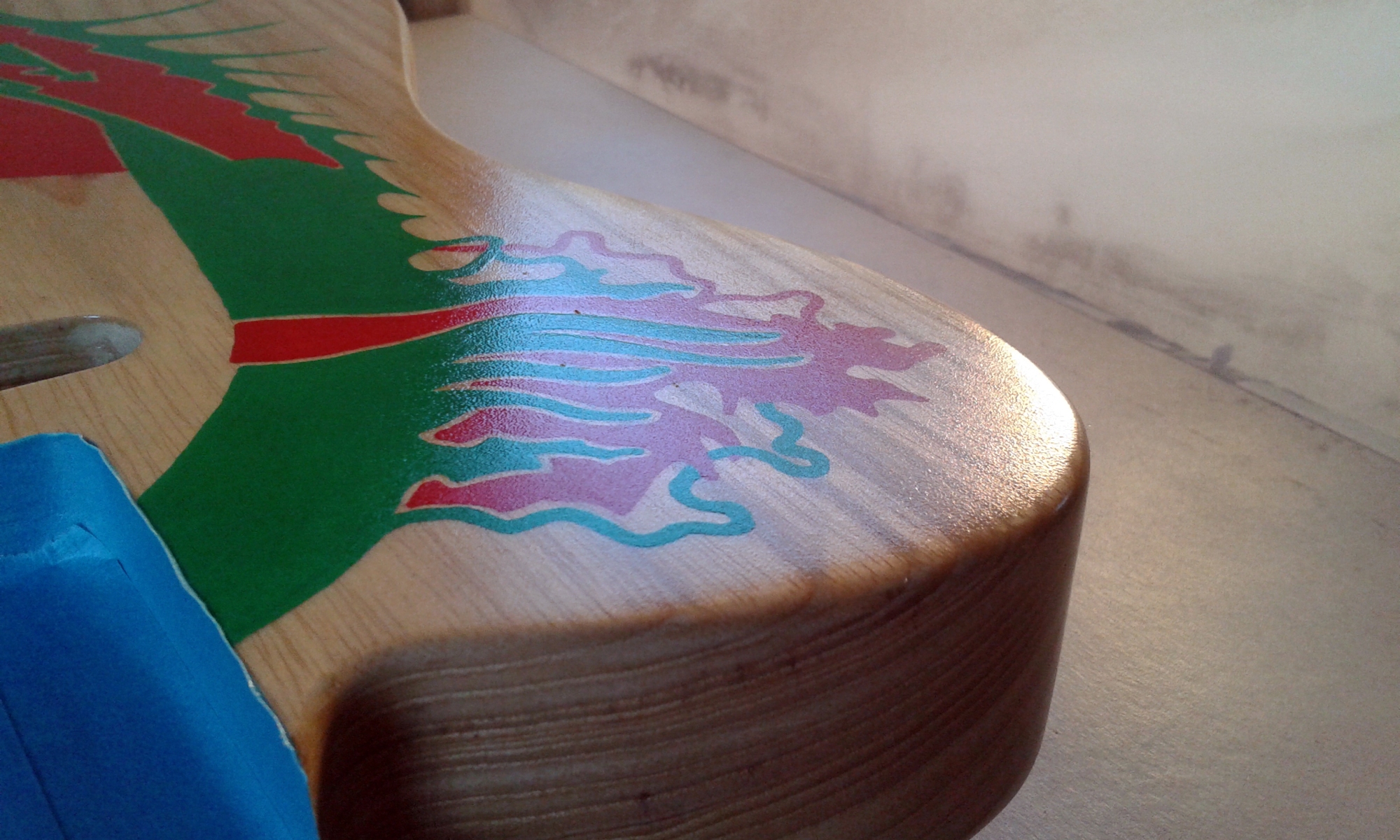 The Telecaster body has had a whole week in the warmth, to allow the first base coats of lacquer to cure and shrink back. It’s amazing how uneven the surface now seems – despite all the grain filling and flat sanding. But that’s the nature of nitro lacquer. It seems to keep on curing, shrinking back and tightening for ages. The picture below, taken under a light to exaggerate the highlights, displays the problem perfectly. Further coats of lacquer will melt into these first, base coats and help to fill the irregularities – but it’s also important to rub back some of the high spots first.

Taking some 400 grit, wet and dry paper over a cork backing block – I lightly wet sand with a little naptha to help the grit cut the very top layers of clear lacquer. I’m trying to knock back some of the high spots, whilst leaving some of the lower, “valley” areas untouched. I’m also trying to avoid sanding back into the paint layer. 320 grit is probably a little bit too abrasive, and the risk of sanding right through the first lacquer coats is considerable. Anything finer than 400 probably wouldn’t cut too effectively, and might get clogged up quickly. For those reasons – I find 400 grit to be the ideal compromise for flatting-back.

Keeping the block moving, and using the lightest pressure possible – you can feel the grit beginning to cut with the naptha – so I can’t afford to focus on any one area, too much. I check the grit paper periodically to make sure it isn’t clogging, and I check the colour of the dust collecting on the wet and dry paper as well – just to make sure I’m not hitting the paint layers. I manage to flat over most of the design – but on passing over the orange areas, I soon notice a slight orange colouration of the removed lacquer dust. I really don’t want to sand through the paint job – so that’s as far as I can go.

The orange layer of paint did appear to dry with a bit more texture than the other colours, and the dried paint seems to sit a little higher on the surface. It’s probably down to the initial consistency of the paint. The orange Plaka paint came much looser than some of the other colours, and didn’t need thinning with water at all. It certainly didn’t cover as well as some of the other colours, and needed a second coat to build up a decent opacity. Some paints are like that – it’s all down to the pigments and binders used. The blue I used went on in one coat. The green covered pretty well with one coat, but had a second coat to keep a few small areas consistent with the rest of the application. The redd dried slightly translucent, and needed a second coat to begin to cover the tonal differences in the wood grain. Even then – if you look close – you can still see some of the wood grain through the red paint. The orange coats were the weakest in terms of coverage, and needed three coats all together. By that time – the orange was sitting slightly higher than the other colours.

Hopefully, I’ll be able to flat it all back under the lacquer, and make the surface consistent – although it might take a few more steps for the orange parts of the design.

Once the face of the guitar has been completely knocked back at 400 grit, I clean the surfaces and edges of the guitar with a little more naptha on a clean paper towel. This makes sure there’s no residue from the sanding left on the surface, which might otherwise discolour subsequent applications. After the naptha has been cleaned off, and any clean residue has evaporated, the body is left to dry. I then place it back in the spray booth on a supporting pad, so that I can spray flat and level onto the front face. The lacquer is sprayed in a number of overlapping passes across the body – working from back to front, and then again, from front to back. I make sure to start and finish each pass before the spray hits the body, and work into the light so I can check the coverage is overlapping properly, and laying a nice, even coating. After a complete front to back, and back to front coating – the body is left to dry for an hour.

An hour later, the body is rotated 90 degrees anti-clockwise, and then checked into the light for any dust contamination that might have settled. My spray booth has a covering door, which allows me to cut down the chances of stray contamination – but stuff just floats about, and always seems to drop on the most noticeable parts of the work. I keep an anti-static goat hair brush handy, to knock off any annoying contamination.

Then the process is repeated. Passes of clearcoat lacquer covering the body from back to front and front to back. Over-spraying onto the sides of the guitar helps to build up coverage on the edges and sides of the body.

The whole process is repeated twice again, so that the guitar has now been sprayed equally from each direction. The picture above was taken after the fourth pass was completed, and after the coat had become touch-dry. It’s shown in contrast with the first picture, and shows how the irregularities in the surface have been softened by the flat-sanding and extra lacquer coats. Of course, the lacquer still has to shrink back again – so obviously this process will have to be repeated. Maybe more than once. With a good, even coverage of lacquer now applied to the face, it’s returned to the warmth to dry, and to let the lacquer cure. I’ll take another look in a week’s time.