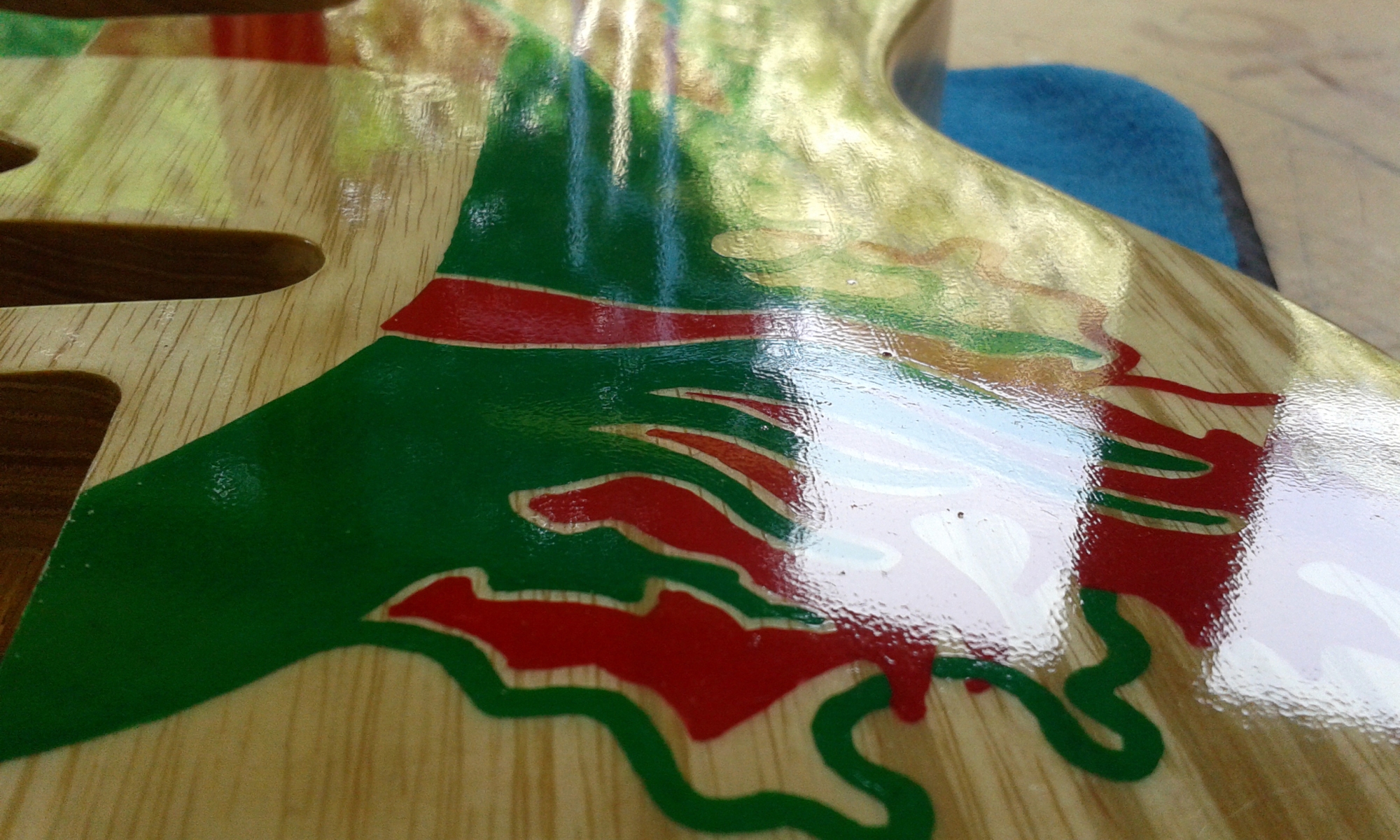 Clearcoating can be a lengthy business. After another week of drying, the latest coats have shrunk back and, overall, the finish looks pretty good. The coats on the back and sides are fairly light – so another couple of final applications will be enough there. The face of the guitar, however, has built up quite a thick, glassy-looking coat, and I really don’t want too much more lacquer on the front of the guitar – knowing that this will likely be brittle, and prone to cracking. (Especially when it comes to drilling out the holes for the bridge and scratchplate screws).

The lacquer on the face is doing it’s job, though. There aren’t too many depressions, due to the painted design, left remaining in the surface. Most of my flat sanding appears to have done the job. There isn’t too much sign of “orange-peeling” either. The lacquer should flat back consistently from here, and I’m looking forward to a good finish – with the painted design looking more like it’s “locked into” the finish coats.

There are, however, a few, troublesome pin-holes in the lacquer finish. When it actually comes to photographing them – they’re difficult to capture – so I wonder if they’re maybe not so much of a worry, after all. However – they’re spread over a part of the painted design which is visible – and which won’t be hidden by the scratchplate. They bug me. I want to try and see if I can get rid of them, and make the overall finish job as good as I can possibly make it. With a shiny coat like this – the project clearly isn’t an aged “replica” type project. More like trying to create a sort of new-looking version – using the original as a model to inspire and build on.

Each lacquer coat so far has served to gradually reduce the surface imperfections, and a few more coats may be all it takes – but by then, the lacquer will really be building up. I think I need to deal with the problem areas individually, and see if I can deal with them before spraying just a few more light, general coats to even things out prior to polishing.

I’ve previously tried an experiment using sanding sealer to see if that works as an effective solution. Drop-filling seems to work with sealer – but it can also be done with lacquer – even with cyanoacrylate, (super-glue). I think the extra solids in sanding sealer help – but there’s a slightly different “feel” to the finish and, even after flat sanding, I can just about make out a slight transition between the sealer and the lacquer. I wonder if the shellac in the sealer, and the lacquer might be shrinking back to slightly different degrees? Since unequal shrinking may cause problems – it makes sense to try and use the same lacquer to attempt the drop-fills this time, and see if I can get the repairs to melt into the surrounding lacquer, and then shrink back consistently.

And it’s a simple process. After cleaning the body down with naptha, I spray a bit of lacquer into a spare, clean aerosol can top. I use a small cocktail stick to lay tiny droplets of the liquid lacquer – directly onto, and into, the pinholes. In theory – the lacquer should “melt” into the dried clearcoat layers and fill the pin-hole depressions. I drop enough lacquer to leave a slight mound, which can be levelled and blended into the surrounding finish, once dried. I’m hoping another thin, overall layer of lacquer,  sprayed after the drop-filling, will help to bring things together, and restore a consistent finish.

Most of the pinholes seem to be concentrated along one particular line of grain in the wood. The grain appeared to have been filled when I applied the grain-filler – but there are a few points where some of the grain must have been extra thirsty. Perhaps the angle of the grain to the surface may have left extremely shallow areas, where the filler may have been pulled out during flat sanding. Whatever the cause – there’s a line of tiny indentations evident in the finish. Working into the light – it’s easy to spot them so, working from back to front, I scan the body looking to spot problem areas, and drop a little lacquer onto each. The lacquer doesn’t take long to dry and, in doing so, the droplets themselves shrink back leaving small, dried plaques on the surface.

And that’s pretty much all I can do this week. The drop-fills need to cure properly, and to bond into the surrounding lacquer. Once everything has had another week to dry, I’ll try to pare back the drop-fill blisters, before flatting back again, and then shooting a general, “once-over” coat to begin to even things out. I was wondering whether to tint the body a little – but with the number of coats already building up – and since any tinted coats would have to be isolated under yet more coats of clear – I’m beginning to think that I should keep things as they are. After all – in time – the nitro will probably begin to yellow naturally, itself.

So it’s back to the drying cupboard for another week.