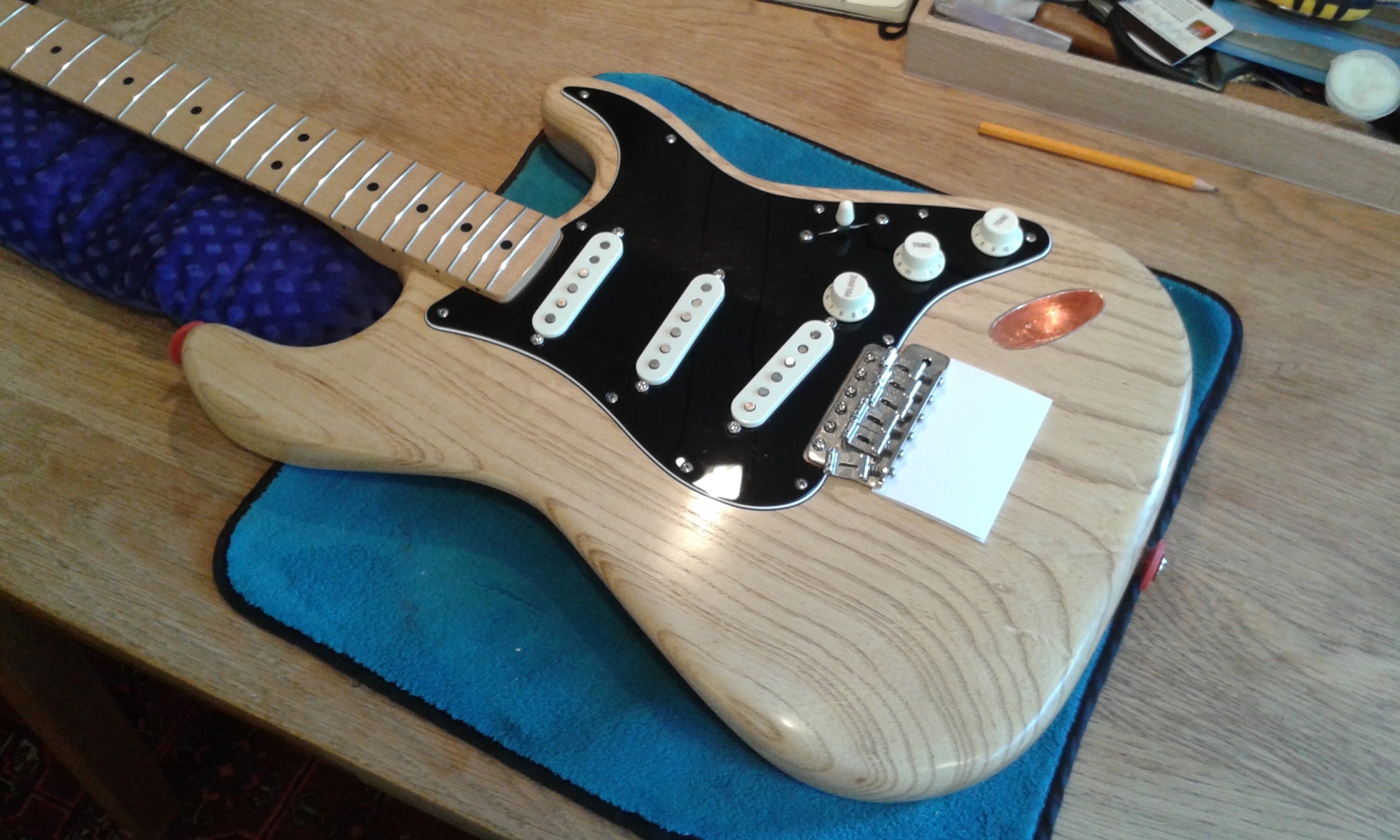 The finish on the body looks really good. I’m really happy with the overall colour and transparency of the oiled finish. I know it’ll likely darken over time  – but it now matches the overall tone of the neck much better, and the two look better suited together.

Rebuilding the guitar shouldn’t, in theory, take too long – but I have an opportunity to fix a couple of annoying niggles I had with my original build. Things which I’ve learned to improve along the way, or improvements to my process and technique. As with every build or rebuild – I’m looking to do it better every time.

The first thing I want to do, is paint out the spring and tremolo routs with an opaque, black casein paint. The paint bonds well with the bare wood, and dries to a nice, uniform, matt finish, It smartens up the finished piece no end, and since it easily marks and becomes gloss with accidental rubs – it’s ideal to help detect or confirm any tell-tale rubbing of the tremolo block, over time, within the main body rout. It only takes a couple of coats to achieve full coverage, and the paint quickly dries to a remarkably durable finish.

And then the body is ready for copper shielding foil to be applied to the pickup and control routs. Before the foil is laid, I lay a connecting ground wire between the main and jack socket routs. The tinned copper wire is bent at one end, into a hole which is drilled to accept a small lug screw. Just below the hole – a black, cloth covered ground wire is wrapped around, and the other end fed through to the rear cavity. A little bit of solder firms up the join, and then the first pieces of copper foil can be laid over the ground wires – connecting everything together, and also holding things firmly in place.

This is a methodology I’ve refined over the course of a few builds now. It provides a single, “star” ground point for the guitar. Importantly – it means only one lug needs to be used – wheras I used to use three or four, and it all got too fiddly. The wires which are “body-side” are essentially hard-wired in place – the screw of the star ground acting as the final, securing connector. The other ground wires which are associated with both the pickup wiring and jack socket, can be connected to a single lug. This means the scratchplate can be removed completely by the simple process of unscrewing the lug screw, and then de-soldering the two jack plug leads. It makes for a neat and tidy solution – making bodies and scratchplates much more interchangeable, and maintenace easier. I tend to keep different pickup setups to their own scratchplates – so swapping each whole unit out, in one, is much easier with this method of grounding.

The copper foil is then laid, and burnished down well. Because the foil is backed with a conductive adhesive – it completes the joins to the grounding wires and lines the whole interior with a thin, conductive barrier. Over time, I’ve learned to apply the foil economically, and I now always try to finish off the edges of all the routs neatly. It doesn’t make the guitar play any better – but at least I know it’s all tidy in there. Once the lining is completed – I check it over for continuity with a multimeter.

Turning the guitar over, I mark where the two claw springs need to be drilled, and then sink the holes using a long, aircraft drill bit. This keeps the angle of the screws nice and low. The claw is then screwed into position, and the black grounding wire, previously fed through from the front, is trimmed to length and soldered securely to the back of the tremolo claw. Once again, continuity is checked with all of the grounding elements.

The body is then laid on its’ back again. The bridge screw locations are already marked – but they need to be drilled out properly. I use a Dremel for this, with a plunge press to keep the holes perpendicular. Once the holes are drilled – the tremolo block and bridge are laid in place, and the six securing screws are tapped home to approximately 90% depth. A little bit of wax helps lubricate the threads as they tap for the first time.

Once all six screws are in to 90%, the tremolo is set so it lies flat on the body of the guitar. Each screw is then tightened down until it just touches the plate. With all six screws in place, the middle 4 are backed off about 1.5mm. This leaves the tremolo securely held, but with only the two outside screws acting as main pivots. Because I’m re-using the bridge screws from before – I need to double check that the tremolo pivots smoothly. Occasionally the bridge screws can deform slightly with use, and if the heads aren’t straight against the bridge plate – the tremolo can twist or bind. If you try this and run into problems – try swapping the screws around, and keep the straightest for the two, outside pivot positions. (You can often see tiny deformations as you drive or unscrew the screws. Minor wobbles of the screw heads show that they’re slightly off-straight. There’s a chance the head won’t contact the bridge plate properly. Use a “wobbly” screw for one of the four inner positions, and keep your straightest for the pivot positions. If in doubt – buy new screws).

With the tremolo pivoting smoothly, I tape the bridge assembly in place, temporarily, to stop it flapping about while I turn the guitar over and sort out the springs. The three springs are installed, and then the claw is tightened up – almost as far as it will go. It’s at this stage that I like to set the tremolo position. As the bridge plate is pulled back against the face of the body with the tightening of the spring claw – I use a stack of business cards to hold the plate in position, approximately 1.5mm above the body. Eventually, the pull of the springs is enough to hold the cards in place, and you can dispense with the temporary securing tape. The 1.5mm elevation works for me. It gives enough backwards movement to raise notes by a full tone – meaning that the tremolo needn’t just be for “dive bombs”. It also has the effect of keeping the individual raised string saddles “flat”, and parallel to the bridge plate. This is supposed, (by some), to help the overall tone of a guitar. I’m not sure about that – but it certainly makes sense to help draw the saddles backwards and forwards in a straight line, during intonation checks.

The neck can now be joined to the body. I’ve already checked the fit, and it’s snug enough to hold in place horizontally without any screws in place. In my book – that’s perfect. Furthermore – the screw hole positions look to match well. I re-use the stainless steel neck screws from before, and install a reproduction Fender “F” plate I’ve obtained along the way – One with a period correct serial number for a late 60’s, transitional build.

With the neck firmly attached I then fit the guitar with two spare strings, in the two outside string positions. Once the strings are tensioned, I can check their paths, and check the straightness of the installed neck. It’s a great fit, and the guitar already feels much more resonant. Much more like a single piece of timber. My previous build had required a neck shim to get the neck angle and action correct. This time – I don’t need the neck shim. I’m pretty sure that has a positive effect on the overall feel of the guitar. I’ve got much more confidence in that neck joint now. Even the fit at the side of the neck pocket matches perfectly. There’s no tell-tale ridge there to indicate a mis-match. Looks like this was planned all along, rather than pieced together from, (mis-matched), bits.

With the neck and bridge in place – I can now fit the scratchplate. The plate fits well and, once it’s properly centred, I tape the plate in position and mark the screw hole locations with a sharp bradawl. They’re then drilled out with the Dremel in a plunge press. Next – the jack socket assembly is threaded into place, and the screw holes marked and sunk. I now always try to install the plate slightly “forward” in it’s rout, so as to reduce the chance of the jack innards accidentally grounding on the sides of the chamber – as was the case with the previous build of this guitar. Just be careful to check that the screw hole location at the rear has enough “meat” to tap into properly. Once sited – the jack socket is screwed down, having threaded the wires through into the main chamber.

With everything now in place, and with no need to update anything else on the electrical side – I turn the scratchplate assembly over onto the face of the guitar, (using a cloth as padding and protection), and then solder the ground wire from the scratchplate assembly, and the ground wire from the jack, to a single lug. The lug is then screwed into place at the “star” ground location. Continuity checks with a multimeter confirm a continuous ground.

The white “hot” wire from the jack can then be soldered into place on the volume pot. The usual screwdriver check with an amplifier connected demonstrates that the circuit is properly functional again. The scratchplate screws are then be tightened down a final time – and the Ash Stratocaster is back in one piece.