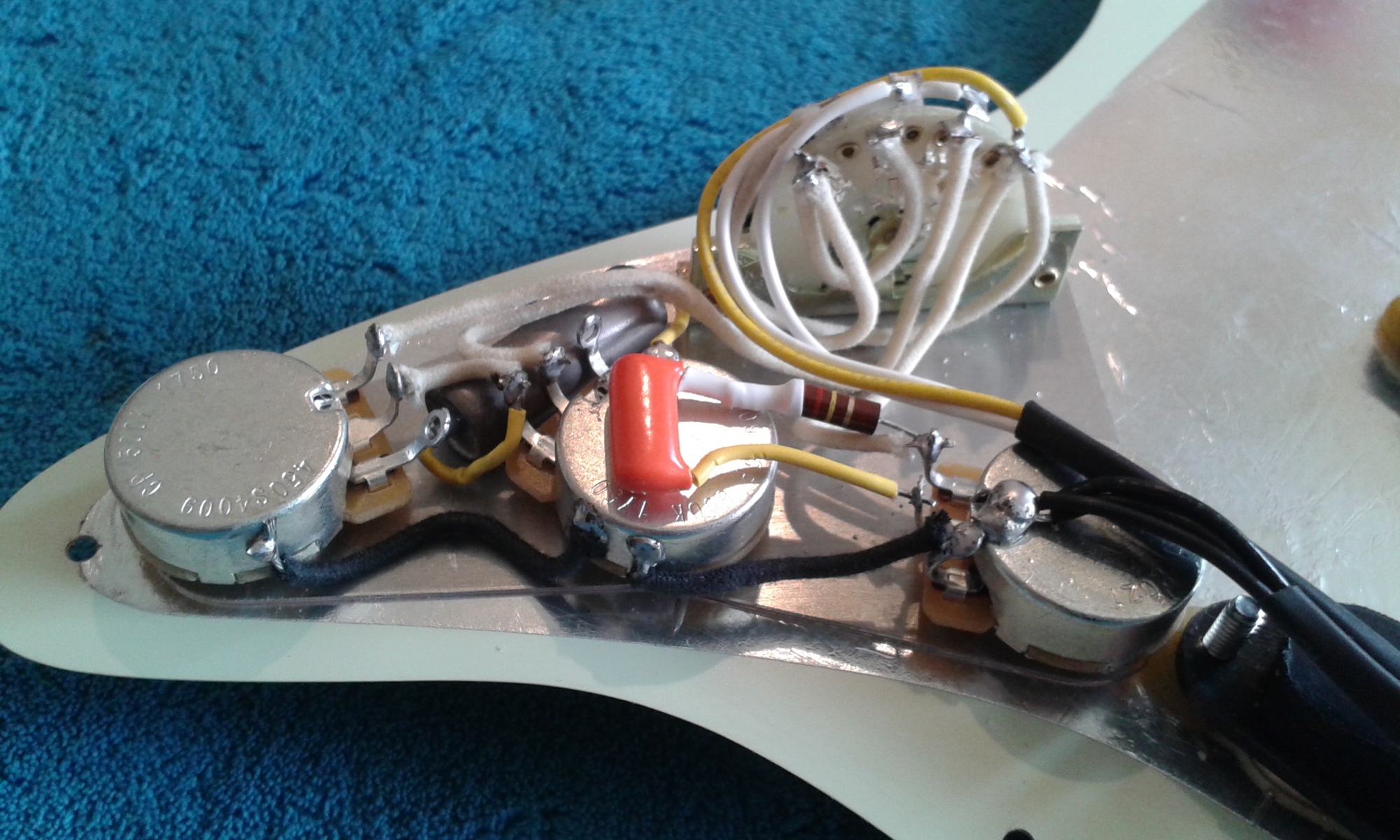 After fitting the wiring circuit for my gold leafed hardtail Strat – I’m left with a few components which I’ve set aside to make, and fit, a treble bleed system. I understand the increased output from the Fender Vintage Noiseless pickups can bring about quite a different character from the usual tone, normally anticipated from standard single coils. Despite being marketed as a noiseless solution which provides a “classic, vintage-style tone” – the pickups produce a notably “hotter” signal, (9.8k impedance as opposed to 5.6k on vintage examples), and may need “dialling back” a little, to control some harsh, tonal characteristics. That “ice pick” treble can be quite uncomfortable to listen to at volume. The wiring circuit, as fitted, already attempts to slightly dampen some of that excess treble output, whilst keeping as much clarity and definition as possible – but there will still probably be some volume adjustment required to bring the output down to more familiar levels, and to “clean up” the sound.

And that’s where things can get tricky. Since volume pots have, in themselves, some internal resistance, and since attenuating the signal results in dumping some of the signal to ground – there’s a tendency for the weaker, higher frequencies to drop off quicker than the stronger mids and lows. This typically results in a sound that gets muddier and darker as the volume is progressively rolled off. What’s required, is some kind of device which allows some of those treble frequencies to pass, unimpeded, through the volume control. That’s where a Treble Bleed circuit comes in.

On a tone control – tone capacitors are used to progressively filter out high frequencies and pass them to ground, where they are eliminated from the audible signal. That same function can be used, in a slightly different way – but this time, to pass high frequencies in parallel with the volume pot. Instead of fitting a capacitor between the output, “wiper” terminal and ground, (as on the tone pot) – a capacitor can be fitted between the input and output terminals of the volume pot. The signal passes through the pot, (which is a variable resistor), and is attenuated as the volume is lowered. The capacitor provides a shortcut for high frequencies in a range above a certain level, (which corresponds to it’s capacitance). The lower the capacitor value, the higher the range of frequencies which is allowed to pass. So, as the volume pot is turned down, the signal is reduced in volume – but some treble frequencies are allowed to bypass the volume control altogether. The rest of the signal still becomes darker and muddier, but the extra treble which “bleeds” through helps keep things bright.

For treble bleed circuits, the capacitance value is usually quite low – far below the usual value of tone caps. Commonly used values are anywhere between a few hundred picofarads, and 2 nanofarads.

Functionally – these low capacitance values allow most high frequencies through, but I suppose subtle variations in the different values might just affect some of the high frequency harmonics and “detail”, slightly differently. Basically – the effect is that of a simple high pass filter. The lower the value of the capacitor – the higher the frequency shelf, above which, the signal is allow to pass. The capacitor choice should, in theory, be selected to work in tune with the total inherent impedance of the system. There’s already resistance in the pickups, the pots, and even from the length of cable connecting the circuit to the amplifier. The treble bleed capacitor can, theoretically, be selected or “tuned” to suit a particular scenario or setup. In actual practice – I’m not too sure how audible some of the slight subtleties actually play out. Many players report hearing “no difference at all” between different values of capacitors acting as treble bleeds. For others – the difference is noticeable. Once again – it seems to be all down to experimentation and personal taste.

So a single, low value capacitor alone, can keep the guitar tone bright as the volume is rolled down. But there’s a problem…

…as the volume drops, low frequency tones are now attenuated more than the high frequency signals, which are allowed to bleed through. As the volume drops – the overall tone becomes noticeably thin and “tinny”. For players who stick to 10 on the dial and “dime” the controls at all times, this is irrelevant – since at full volume, the capacitor doesn’t have an effect. However – for players who dial back and “clean up” their tone at slightly lower volumes – they might notice the tone also becomes thin. What’s required is a way to let through more of the low frequency signal as the volume drops, to compensate.

The usual solution is to run a small resistor in parallel with the treble bleed capacitor. The lower the value of this resistor, the less the capacitor allows high frequencies to bleed through at low volumes. This keeps the tone more balanced as the volume drops off. However, it can, in turn, affect the actual drop-off taper of the pot. Some players might find that the volume drop-off is more, or less pronounced at particular ranges on the volume dial. In some cases this in itself can be problematic – but the difference is usually, “something to put up with”, and it’s usually just a matter of “getting used to” the new taper. Most of the “ready made” treble bleed circuits available, tend to be R/C (resistor / capacitor) systems like this – with component values somewhere within the usual, recommended ranges. For the capacitor, thats roughly 100pF to 1500pF. For the resistor – 100k ohm to 300k ohm. Most of the recommended combinations out there seem to be designed for standard single coil pickups with 250k pots. There are, however, some recommended combinations designed for humbuckers and 500k pots, and they seem to rely on a higher value capacitor, (roughly double the size).

The negative effect on the pot taper can actually be avoided completely, by linking the capacitor to the resistor in series, (one after the other), rather than in parallel. I think this all starts to monkey around with resonant frequencies, and other phenomena which I’ve heard about – but am unable and unqualified to otherwise explain. From what I’ve read – the “Kinman” modification, after Chris Kinman who pioneered it, takes a .001uF capacitor and a 130k resistor, and places them in series. This supposedly provides a solution which solves both the “tinny” tone issues and the taper problem. If anything – this comes at the expense of a slight flattening-out of the tonal range, and a reported, relative “boost” to the mid range. Again – much appears to be down to the actual values of the combined components, and higher ratings for the resistor appear to be recommended by some players – especially for 500k pots and humbuckers. A value roughly equivalent to half of the pot’s rating seems to be a common rule of thumb. Since my pickups are already being treated a little like humbuckers, and the pots are 500k – I’ll try this “Kinman” solution, but pair the usual 0.001µF capacitor with a 220k carbon composite resistor. Both suggested values are regularly encountered on the usual online forums – but the only way to test my selection is to fit it, and see what it sounds like.

I’ve sourced an “Orange Drop” 102K capacitor, and a generic 220k ohm, carbon composite resistor to make up my treble bleed system. The capacitor is a modern Cornell Dubilier example, rather than a coveted “Sprague” variant, and the resistor is the closest match to a “legendary”, Allen Bradley, CC type resistor, I could find. This one cost me pennies rather than pounds. For carbon composite resistors – it seems the popular market holds vintage NOS “Allen Bradley” components, in similar high regard to NOS capacitors by “Sprague”. There’s a fair possibility I may have to tweak the values of one, or both of the components to get my sound right. No point paying for reputation over actual performance – especially if I might have to rip it all out again to try something else.

It’s a simple enough arrangement to improvise – albeit a little fiddly for sausage fingers. I simply cut one leg of the capacitor short, and then wrap one of the resistor terminals around – Trim the excess with wire snips, tuck the stray ends in, and then secure with a little drop of solder. In my foggy world of cataract vision – this is something not unlike microsurgery – but it works out easy enough.

I slip a little shrink tubing over the join – to insulate the upper part of the leg, and to help stop short circuits when I come to put everything together. I’ll probably also need a bit of insulation on the other leg too – but that will depend on how neatly it’s eventually mounted.

Using an Orange Drop and a CC resistor – this was never going to be the most compact of solutions – especially laid out in series. I could effectively fold the arrangement, and try and sit it just below the volume pot terminals. However, since I’ve already located the tone capacitor well out of the way, rather than in it’s usual position over the top of the first tone pot – I have the possibility of using the vacated space there, instead. A little extra insulation on the exposed leg of the treble bleed, and the mod can sit neatly – still allowing clear access to the terminals for connection and soldering. With the treble bleed in position – the first connection at the input of the volume pot can be soldered.

All that is left to complete now, are the final connections which join the body to the scratchplate mounted components. There are two wires to connect. Firstly, the black jumper wire which links the scratchplate installation to the central grounding point. The wire has already been prepared as part of the body wiring, and this is soldered directly to the back of the volume pot. Secondly, the “hot” output wire running to the jack socket is connected to the “wiper”, output terminal on the volume pot. Since the other, as-yet-unsecured leg of the treble bleed system also connects to this terminal – both can be secured in place with the same dab of solder.

The scratchplate is inverted, and temporarily fitted, (no screws). By connecting the guitar to an amplifier on (very) low volume – I can check the basic functionality of the circuit by tapping the poles of each of the pickups with a screwdriver. A satisfying clunk, (with no scratching or crackling), confirms a decent enough connection for all pickups. The switch works as it should, and I can detect basic volume and tonal changes as the pots are rolled off too. Despite the presence of fluorescent light fittings in the workshop – there’s absolutely no background hum!

I screw the pickguard down with new stainless steel screws, and then fit a set of Fender knobs, (Fender parts number 099-1369-000), and a matching switch tip (Fender parts number 099-4938-000). I don’t quite know what colour the Noiseless pickup covers are supposed to be – but the closest match I can find in the usual range, is “Aged White”. The knobs are direct, push-on fittings for CTS type split shafts. With the volume pot fully opened up, I align the “10” on the volume knob with the nearby bridge pickup adjustment screw, and push it home. Then the Tone knobs push on, so that when the pots are fully open – the “Volume – Tone – Tone” labels are lined up as shown. Jobs a good’un. Now to get some strings on, and see how it sounds.