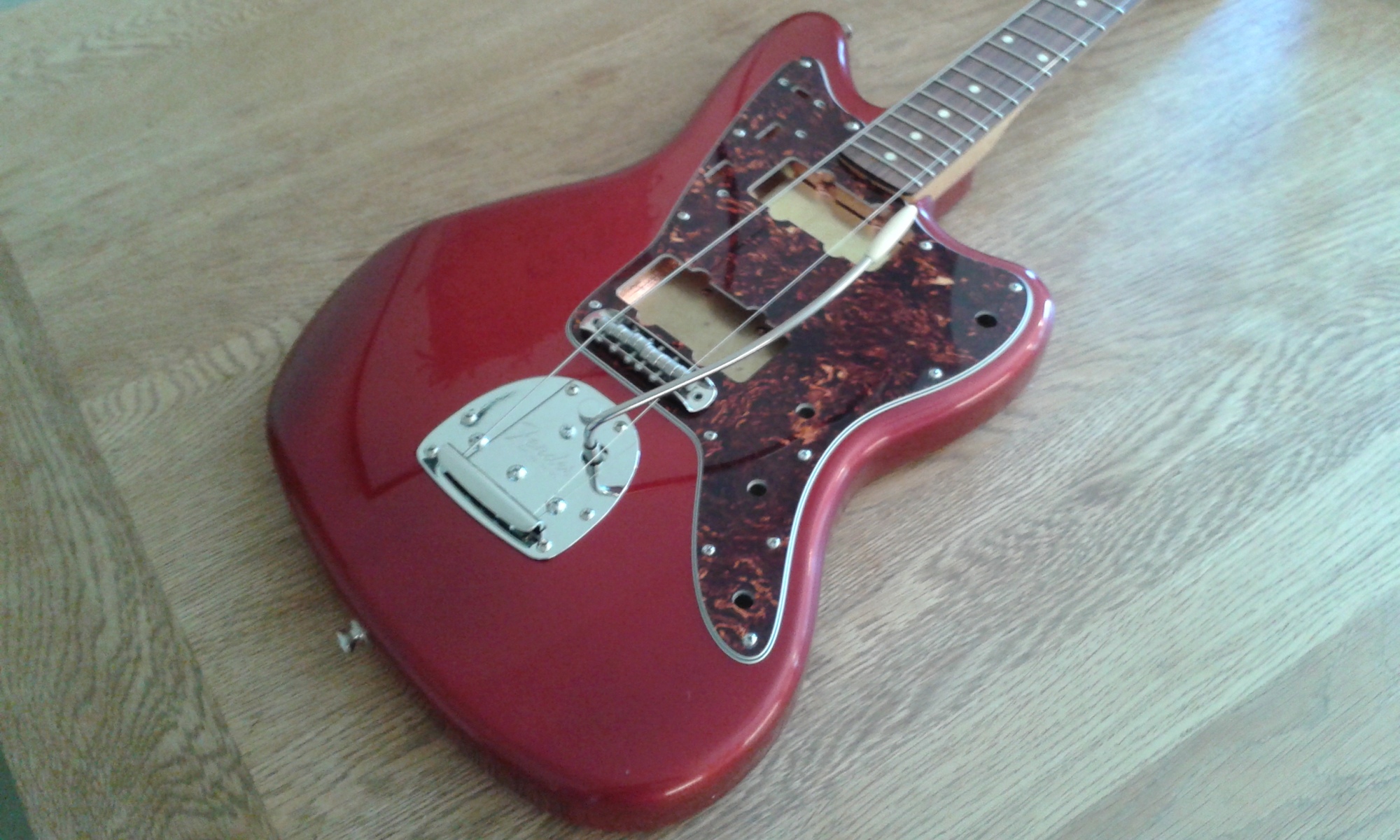 Having had to take things easy with eye problems for a while – I’ve ended up with something of a “backlog”. Now there seem to be days where I just can’t seem to get things done, simply because there’s so much to do. I think I have four project guitars on the go at the moment, and a whole load of tasks I’ve been putting off around the house, to pick up on. Add to that a new kitten in the house, and time is suddenly at a premium. As ever – the only way to get through a significant backlog of work, is to break things down, and chip away one task at a time.

At least, while I’ve been laid up, I’ve had the opportunity to source and stash away many of the parts I’ll be needing. That means I can immediately begin to pull together a few of the builds, and today, I can finally begin to assemble my custom Jazzmaster – now that the body has been polished up after re-finishing.

I sourced a new, (2020), Jazzmaster neck a while back, specifically with this project in mind. It’s a vintage style “Classic Player” neck – 9.5″ radius, 21 medium jumbo frets and a Pau Ferro fingerboard. It’s finished with Fender’s “urethane”, which is glossy and hardwearing. For the money – it’s not a bad neck. I’d much rather have a rosewood board, but Fender seem to have moved some of their recent production to feature Pau Ferro instead – (perhaps in reponse to changes to the international CITES regulations). I once thought about staining the fingerboard darker, to closer match rosewood, but the lacquer to the neck extends over the fingerboard edges. This essentially “fixes” the colour there, and any staining therefore wouldn’t match through, at the edges. However – now that I’ve re-finished the body in it’s dramatic, custom red colour – the fingerboard tones are, at least, much more harmonious with the rich red of the body, and the two do look reasonably well matched together.

I’ve previously fitted the neck with Gotoh SD510 tuners – so there’s nothing more needs to be done before I can attach the neck, using a genuine serial stamped plate from a Fender American Professional Jazzmaster, which has been broken for parts. The neck is supplied already pre-drilled to standard Fender pattern – I fully expect everything to fit and align properly, without any need of minor modification. The neck plate appears to be made from a more lightweight alloy than the usual steel plate, and it comes drilled for use with a tilt-adjust mechanism. There’s no such tilt mechanism built into the neck pocket here, but I’ll be using a GOTOH plate gasket to cushion the plate anyway. It’ll blank off the tilt adjust, generally neaten things up and and should help prevent any future damage to the finish, due to overtightening issues. To attach the neck, I’m using a set of four Callaham stainless steel bolts. These are lightly lubricated with wax before tapping home. They’re tightened up – working opposite corners in turn – until they just pinch, and hold the neck securely.

I’m using a Fender Japanese “62 Assembly” Tremolo for this build, (Fender parts number 026-424-8000). It’s considerably cheaper than the USA made alternative, and yet still comes with all the necessary vintage styling. However – the lock button seems to be entirely cosmetic. It slides, just as it should – but fails to actually contact the spring plate. Why Fender do this – I just don’t know. I know some people don’t seem to know how the function works properly – but to disable it entirely seems utterly pointless. Where’s the saving? – apart from, perhaps, a slightly smaller locking disc on the reverse? The lock is a really useful option to have – since it helps keep things stable during tuning and then, subsequently, stops the guitar falling out of tune if a string breaks. All that said – I’m not a heavy tremolo user, and the money I save on the unit itself easily covers the price of a Staytrem arm and collet upgrade. The Fender plate doesn’t come with any fixing hardware or, indeed, a trem arm, (more money saving cuts?). I have some spare 1-1/4″ Fender screws to properly attach the unit, and the Staytrem upgrade gives me everything else I need.

It’s important to order the correct size collet replacement from John at Staytrem, (there are metric and imperial options available). Then, it’s a straightforward swap out using a socket wrench and a dab of LocTite to keep the new nut firmly in place.

The tremolo plate is screwed into place on the body, and then the Staytrem arm is pushed firmly into the nylon bushing, in the collet. It’s important to push the arm all the way in, until the neck of the collet lines up with the dot engraved on the shaft of the whammy bar. This stops the arm from flopping about, and it’ll stay exactly where you left it each time. I then tighten up the central spring tensioning screw, so that the tremolo action is stiffer. This stops the plate and spring assembly from rattling about, until I begin to string the guitar up.

I’ve already looked at Fender offset bridge options, somewhat extensively, on previous builds. The J. Mascis Fender Squier body I’ve re-finished for this Jazzmaster, already comes fitted with threaded bushings for a Fender Adjust-O-Matic bridge, (Tune-O-Matic type). Pulling the bushings always risks damaging the original finish – so instead, I kept them in place and re-finshed around them. However – the Gibson style, TOM bridge just isn’t what I’m looking for here. I’ll ideally need a little movement in the bridge when operating the tremolo, and the TOM saddles aren’t laid out to follow the 9.5″ radius of the fingerboard. (They seem to be designed for a flatter neck – somewhere between 12″ and 14″). I’m a huge fan of the Staytrem bridge upgrade for Fender offsets, and somewhat surprisingly – I think one might work even in these threaded, TOM type bushings. The bridge posts certainly drop easily into place and, although the forward and back movement is slightly restricted – there should still be enough movement to allow for light to medium tremolo use.

I’ve sourced a 9.5″ radius bridge, to match the Classic Player neck profile, from John at Staytrem. It drops right into the bushings, without any issues. The only problem is that the threaded bushings don’t have a conductive metal base for the bridge posts to maintain a grounded contact point. One of the bushings itself has a grounding wire connected, and it is the end of this wire which I’ve previously tapped into to create my central “star” grounding point for wiring the circuit. Fortunately – there’s a tail of this original ground wire left curled around the bottom of one of the bushing holes. When I drop the bridge into place – the metal leg of the bridge comes into intermittent contact with this wire. Annoyingly – the contact comes and goes as the bridge moves forwards and back. All I need is something to keep the contact permanent, and I’ll have a fully grounded bridge.

The easiest thing to do, is to fashion a couple of little plugs of wire wool, and to push them down into the bottoms of each bushing. There – they’ll provide more than enough contact points for the ground, whilst hardly restricting the movement of the bridge at all. Little plugs are fashioned and some of the looser ends of wire folded in. The plugs push down into the bushings with a screwdriver, and the threads help keep any of the straggly, fine wire wool down at the bottom of the holes. The bridge unit is slotted down into place on-top, and then complete ground connectivity is checked and confirmed with a multimeter.

The bridge can be temporarily secured in place with the fitting of a couple of spare strings. Fitting two of the outside strings alllows me to tension the neck slightly, and to ensure the neck and string alignment is OK. I can then adjust the tremolo spring tension screw again, until the tremolo action is stiff – but still useable. The bridge rocks slightly, back and forth – the way it’s supposed to – and the neck seems generally well aligned. I adjust the bridge height to provide a good, temporary working action – by adjusting the two posts with the allen key provided. I can set the action fairly low, and yet still have a functional bridge. There doesn’t appear to be any need for a neck shim, and hopefully the slots in the Staytrem saddles will be sufficient to keep the strings in place – even with this low break angle. If the action needs raising to improve the downforce at the bridge – I’ll likely have to shim the neck pocket by half a degree, or so, to compensate.

While I’m back in assembly mode – I can fit a pair of Fender “original” strap buttons, (Fender parts number 099-4915-000). I discard the stock screws, and use a pair of Callaham replacement stainless steel screws instead. These won’t rust or discolour over time, and the screws seem to be slightly longer and thicker than the original tapped holes are expecting. This makes the buttons just that little bit more secure, and there’s no need to pack the holes out – as is sometimes the case with some original fittings. I use a pair of new, white felt Fender washers to pad the strap buttons themselves, and the screws are securely, but not over-tightened.

And there it is, (for now at least). Jaime at The Creamery is a busy man at the moment, and there’s a few monthsahead on a waiting list, for the “Extra Width” Jazzmaster pickups I need him to wind for me. Looks like wiring and setting up this project, might be a task for the winter months to come. In the meanwhile, the guitar is now “in one piece”, and I can admire its’ offset good looks and new finish, whilst I try and track down a G&G Jazzmaster case for it to live in. A little progress, and a few components less in the project box. What’s next?…