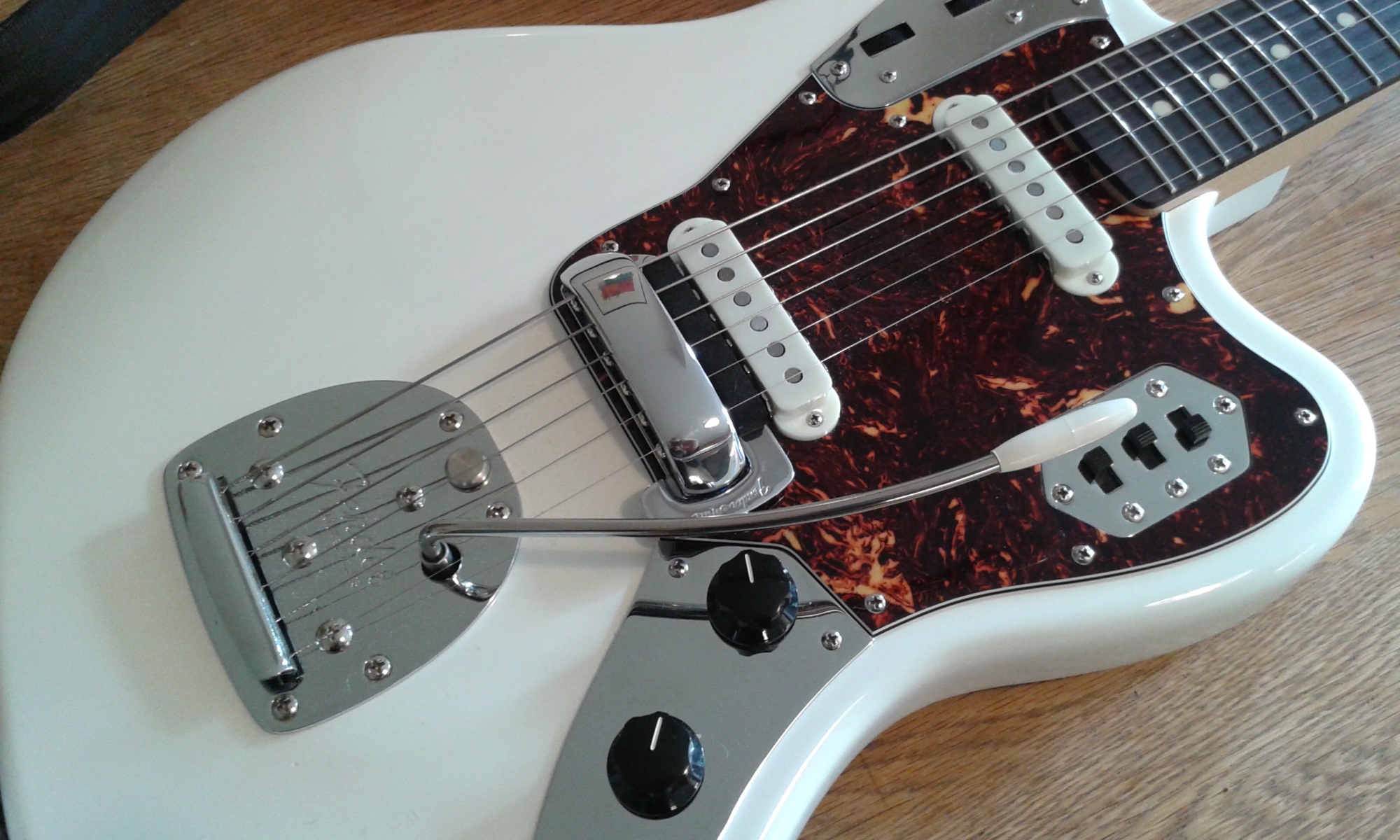 In the late 1950’s, offset designs by Leo Fender broke the mould of the traditional, “Spanish” guitar form. Originally conceived to provide a balanced instrument – suitable for both standing and seated players, Jazzmasters, Jaguars and Mustangs stand out from the crowd, and they’ve become a personal favourite source of inspiration for quite a few of my, most recent project builds.

A list of Fender offset players reads like a Who’s Who of alternative music. From Joe Pass and even Bob Dylan in the early Sixties – all the way through to Kurt Cobain, Tom Verlaine, Kevin Shields, Johnny Marr, Blixa Bargeld, John Frusciante, Thurston Moore, Black Francis, Elvis Costello and Lee Ranaldo. There’s something rebellious about an offset.

Based around the original, 1962 Jaguar specification – this custom build features a two piece alder body, hand-sprayed and finished with Olympic White, nitrocellulose lacquer, together with a maple neck with a rosewood fingerboard.

My first offset build, and my second build overall. Quite ambitious – but I learned so much in the process. By sticking with it, improving the original and fixing one or two mistakes along the way, I became much more confident in some of my techniques and processes.

Custom build based on Kurt Cobain’s personal designs for a Jaguar/Mustang hybrid.

This is a Custom specification, Candy Apple Red Fender Jaguar – based around a 2020, Fender USA “Original ’60’s” body. The neck is custom-built, block-marked and channel bound by Musikraft, and I’ve finished the headstock to match the body.

The customisation takes the some of the traditional vintage stylings of 1960’s example Jaguars, (eg: mute plate and painted headstock), but also incorporates more “alternative” elements, such as the hand wound Creamery “Alt-88 Mid-Range” pickups and upgraded “Staytrem” bridge and tremolo.

The build is completed with a “Johnny Marr” wiring scheme. which is designed to provide a slightly more flexible, and up-to-date upgrade over the usual Jaguar wiring.

I’ve always admired the form of Fender’s Jaguar, and have long harboured the desire to build my own “perfect” example, to my own custom specification.

This Jag was built on a “vintage style” Fender US Jaguar body, but adds a few refinements gleaned from all ages of the Jaguar’s sixty year development. It has a vintage vibe – but it’s also draws on some of Johnny Marr’s own refinements, as found on his Fender “signature” guitars.

A custom built, Ash Fender Jaguar. The project came about to try out some alternative finishing ideas on the body, with the possible option to incorporate some Creamery “Alt’88, Twin Sound”, coil-tapping Jaguar pickups.