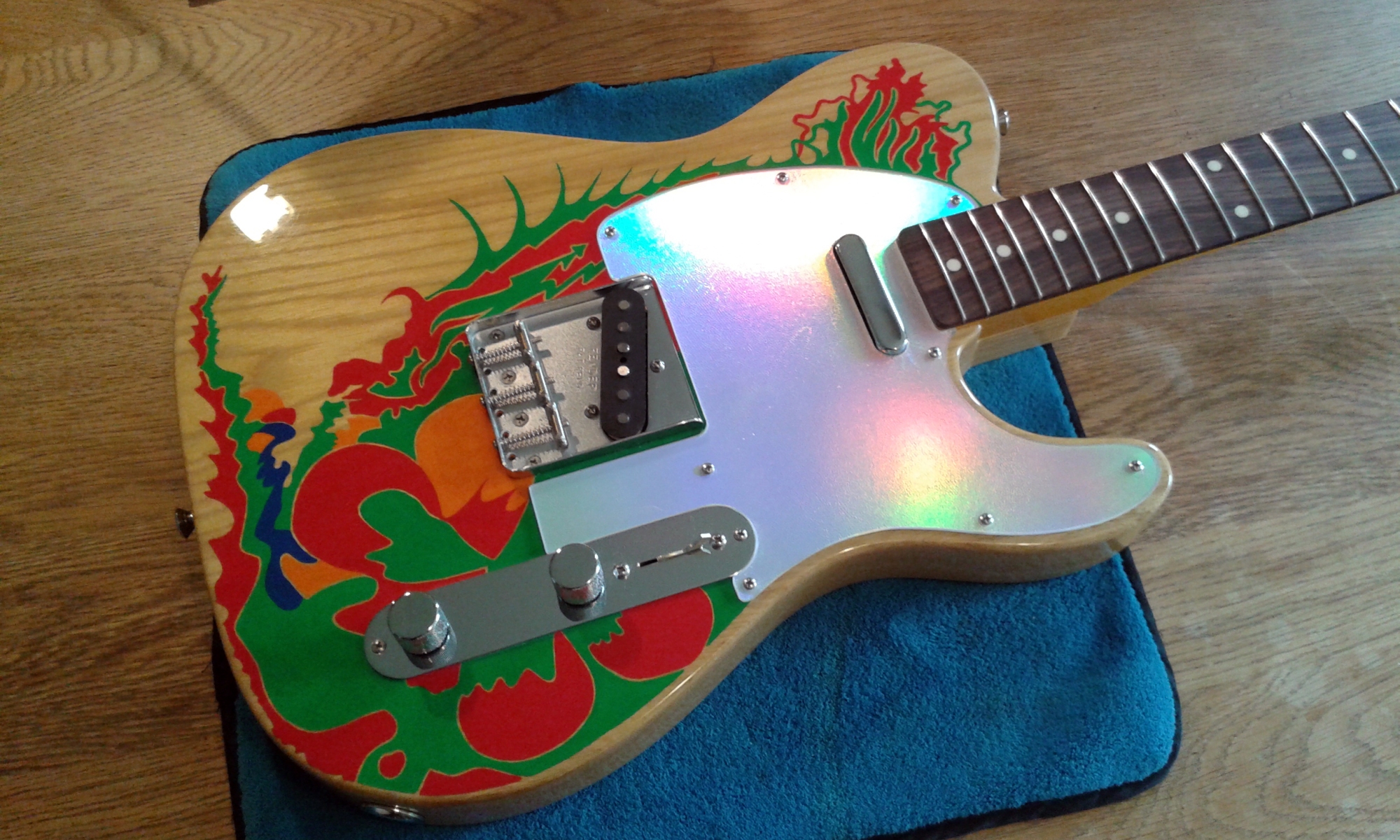 I can’t find any information on Jimmy’s original wiring. Nothing. It’s well documented that the Dragon Telecaster came, originally, as a gift from Jeff Beck and that it was heavily modified – cosmetically at least – by Jimmy, in the days after he left the Yardbirds and formed Led Zeppelin. But whether he, or Jeff Beck, messed with the original electrics or not, is anyone’s guess. Until the late ’60’s – Fender used three-way switches on all their guitars, and in the Telecaster, they used a particular circuit and switching schematic which became known as the “Dark Circuit”. Whilst some of the sounds available might not be the first you might associate with Led Zeppelin’s Jimmy Page – it remains highly likely that this was the way Jimmy’s Dragoncaster was, in fact, wired.

In modern, post-60’s Telecasters – similar to the five-way Stratocaster switchings – the blade switch operates to select the pickups separately, or in combination. In the “Dark Circuit” things were a little different.

Originally, the standard 50’s Telecaster wiring attempted to provide a kind of alternative tone from the neck pickup, which seemed more useful for the playing of bass parts. Why Leo Fender provided this was a bit of a mystery – since the Precision Bass from 1953 would seem to be a far superior provider of low-frequency sonics. It’s possible that Leo was focusing on the day-to-day practicalities of guitar players playing in various group combinations – perhaps Jazz or Country setups. The standard rock and roll four piece outfit was still, very much, in development at the end of the fifties. It would take the development of personal amplification to make big changes to the sonic make up of the pop groups of the sixties, and beyond.

The Fender “Dark Circuit” took the standard three-blade switch, but took positions 2 and 3 to control the neck pickup – leaving only position 1 to select the bridge pickup.  With position 1 selected, the blade is pushed backwards towards the tail of the guitar, and the bridge pickup only is selected, with volume and tone control functionality via the two control knobs. This is the same as on more modern Telecasters, but the circuitry behind the scenes for the other two settings is very different.

With the “Dark Circuit”, position 2 selects the neck pickup only – but again with volume and tone functionality via the two control knobs. (On modern Telecasters, this position engages both pickups wired in parallel). The tone capacitor used seems to be usually around the 0.05mfd value. It’s with position 3 that things get very different. Position 3 on original Broadcasters and Telecasters selected the neck pickup, but bypassed the tone control and, instead, assigned a “bassy” sounding preset. It did this by wiring in a 0.1mfd capacitor – separate from any tone potentiometer, and therefore not “variable” or “changeable” by the player. The volume pot is still engaged – but the sound produced by the bass preset is quite dark and woody. Its’ deep and subdued character led to the wiring getting it’s “Dark Circuit” moniker, although the schematic is also sometimes referred to as “Blackguard” wiring from the days of the old, black pickguard, Broadcasters and Nocasters.

I could go over the exact wiring of the circuit – but there’s plenty of information out there on the Internet. The Seymour Duncan website is really good for wiring schematics, and I’m forever checking out Dirk Wacker’s articles on the Premier Guitar website. I’m using a couple of Luxe, replica capacitors for this build, and Luxe also provide a detailed sheet showing various schematics, together with authentic, case-study  examples, to help put the circuit together.

However, the first thing I encounter, in putting the wiring together, is a problem. The original CTS pots I obtained seem to be a touch too big. Once they’re attached to the plate – the plate won’t quite return to sit in the slot correctly. It’s only a tiny little bit out – but it spoils the alignment with the scratchplate. Nothing for it – I’ll have to get hold of a couple of CTS mini pots. These have a slightly smaller footprint – allowing the plate to sit properly within the slot. They’re going to be a bit more fiddly to wire – but I reckon I can deal with it.

The mini pots are attached to the control plate – together with a CRL, 3-way spring switch. I use a little thread lock compound to secure the screws and nuts – so that things won’t work loose over time. Unfortunately, the CTS mini pots only come in split shaft configuration. My Fender “Pure Vintage” control knobs require solid shaft pots to sit properly. You can still use the tiny grub screws to secure to split shaft pots – but the knobs always look a little cock-eyed. Fortunately, there are some brass bushing sleeves available from Allparts. These slip over the split shaft ends to provide a proper fitting, for when the control knobs are finally attached.

The first bit of soldering involves laying some short jumper wires at the switch. I use some tinned, copper wire to do this, and take the opportunity to lay a running ground wire between both pots. This isn’t on the original schematic – but will work with my usual single, “star ground” point on the guitar body. I also tin each of the pot terminals, and lay a few blobs of solder on the back of each pot, so that I can attach ground wires and capacitors.

The circuit tone capacitors are then laid in position, and the wires bent and cut to suit. It’s always wise to leave a little bit more lead wire than you actually need – even if you have to create the odd meander and bend in the leads. I do this just in case I ever have to desolder the caps. (If there’s a risk of creating short circuits anywhere – you can get hold of fine, yellow, insulating tubing which can help keep lead wires separate. If you leave a little extra lead wire – you can always pull out the slack and re-use the cap on another job.

With the capacitors in place – there’s not too much actual wiring to complete the control plate circuit. I’m using a, period-correct, yellow cloth, push back wire. With the pots wired, all that remains is to wire in the pickups, and the output jack. However, before the plate is essentially wired into the guitar body – it’s a good time to solder on a short fly lead with a screw lug on the end. This will connect to the central ground point, and it is hard-wired, direct onto the back of the volume pot.

The completed plate is visually checked over – to make sure the connections are all looking good, and then it’s placed on the body so that there’s only a short bit of play required to enable soldering and eventual placement of the plate into position. It always helps to pad the body with a suitable cloth to avoid accidental damage to the body finish.

The lugged ground lead is attached to the central “star ground” point, and the screw tightened to hold everything firmly in place. I check the ground is continuous all over the copper-lined routs, and now even including the pots, bridge and control plate. All that’s left to do, is to wire in the two pickups, and connect up the jack socket. The two black ground wires from the pickups are trimmed, grouped, and soldered to the back of the volume pot – alongside the grounding fly lead, The yellow “hot” wire from the bridge, and the white “hot” wire from the neck pickup are soldered into their designated positions on the switch.

Finally, the black ground from the jack socket is soldered to the back of the tone pot. The installation of the running ground wire between the tone and volume pots means that the jack ground now connects with the central “star” ground – via the lugged fly lead on the back of the volume pot. The last lead to be soldered in position is the white “hot” wire from the jack. This goes to it’s designated terminal on the volume pot.

And that’s it. Before screwing the plate down finally, I check the pickups and pots by connecting an amplifier and then touching the poles of each pickup with a screwdriver. A familiar clunk shows me the pickups are wired-in correctly, and I can even detect the effects of the capacitors – so the circuit and pots all appear to be working right. I screw on the plate, and then attach the volume and tone knobs – tightening the grub screws carefully, and making sure the knobs sit slightly off the plate by slipping a credit card underneath while the screws are tightened up. The only problem I have, is that the black plastic barrel switch tip I’ve kept aside for the project, will not fit the CRL switch. Nothing for it – I have to send off to WD Music, here in Kent, for another. That’s annoying. It actually costs more in postage than it does to buy a pair of genuine Fender switch tips. The guitar will have to return to it’s case again, before I can get on with setting up, and finally hearing what those Don Mare pickups sound like.